Ms. Ford is a mother of three boys in Detroit and has been managing to get through one of the most difficult periods of her life ever since COVID-19 disrupted everything. While working as a Licensed Practical Nurse (LPN), Ms. Ford gave birth to two healthy twin boys in early 2021. Raising two babies and an eight-year-old son on her own was challenging enough, but soon maternity leave lead to being laid-off.

With rent and bills piling up, Ms. Ford knew she needed to find a daycare to take her twins so she could work during the day. Considering her eight-year-old son attended Growing Minds Head Start Center in Detroit, a part of Matrix Human Services’ Child Care Partnership Program, she decided to take her twins there, knowing she could trust them. Once Ms. Ford enrolled her twins at Growing Minds, she was also connected with Matrix Family Advocate, Ms. Jasmaine Capulong, someone who would look after the needs of the whole family.

“Growing minds got me connected with Jasmaine and then as soon as I did my part, they did their part and Jasmaine contacted me right away and was basically there for me.” –  Ms. Ford

As her twins began attending Growing Minds in mid-November of 2021, Ms. Ford was happy to have a place that could take care of her babies during the day, however, her living situation had reached a breaking point. Unable to pay for rent, Ms. Ford was faced with being homeless or finding temporary housing until she could figure things out. She soon discovered a hotel in Roseville that accepts women with children for 90 days as part of the Macomb County Rotating Emergency Shelter Team known as MCREST.

“I said well that was a blessing because sometimes, it’s really hard to get housing that quick or somewhere to lay your head at. And she can stay there for 90 days, and with those 90 days, they will help her find rent assistance or Section 8.” – Ms. Capulong

But living in a hotel with two young babies and the holidays fast approaching, Ms. Ford knew she would have trouble providing anything for Christmas and her spirits were understandably low.

“It was kind of a last minute thing, but that was my fault because I didn’t really reach out to anybody like ‘hey I need help getting gifts,’ I was just gonna do what I could, as long as they were able to open something. I had heard about the Toys for Tots things but when I heard about them, everything was full… I was pretty much shut down about it, I was ya know, depressed and all that, so I really wasn’t outspoken about the fact that I wasn’t gonna be able to provide for Christmas.” – Ms. Ford

This did not sit well with Matrix Family Advocate, Ms. Capulong. Knowing that Matrix Human Services provides gifts to Head Start families in need every year as part of the Angel Tree Program, she decided to take matters into her own hands even though she knew it was too late to enroll the Ford family. (see photos and read more about Angel Tree 2021 here)

“I already knew about the twins and once I found out about the eight-year-old son…I have a six-year-old and I could not imagine waking up on Christmas, now you’re living in a hotel basically. So I told my husband, ‘can we adopt this family?” – Ms. Capulong 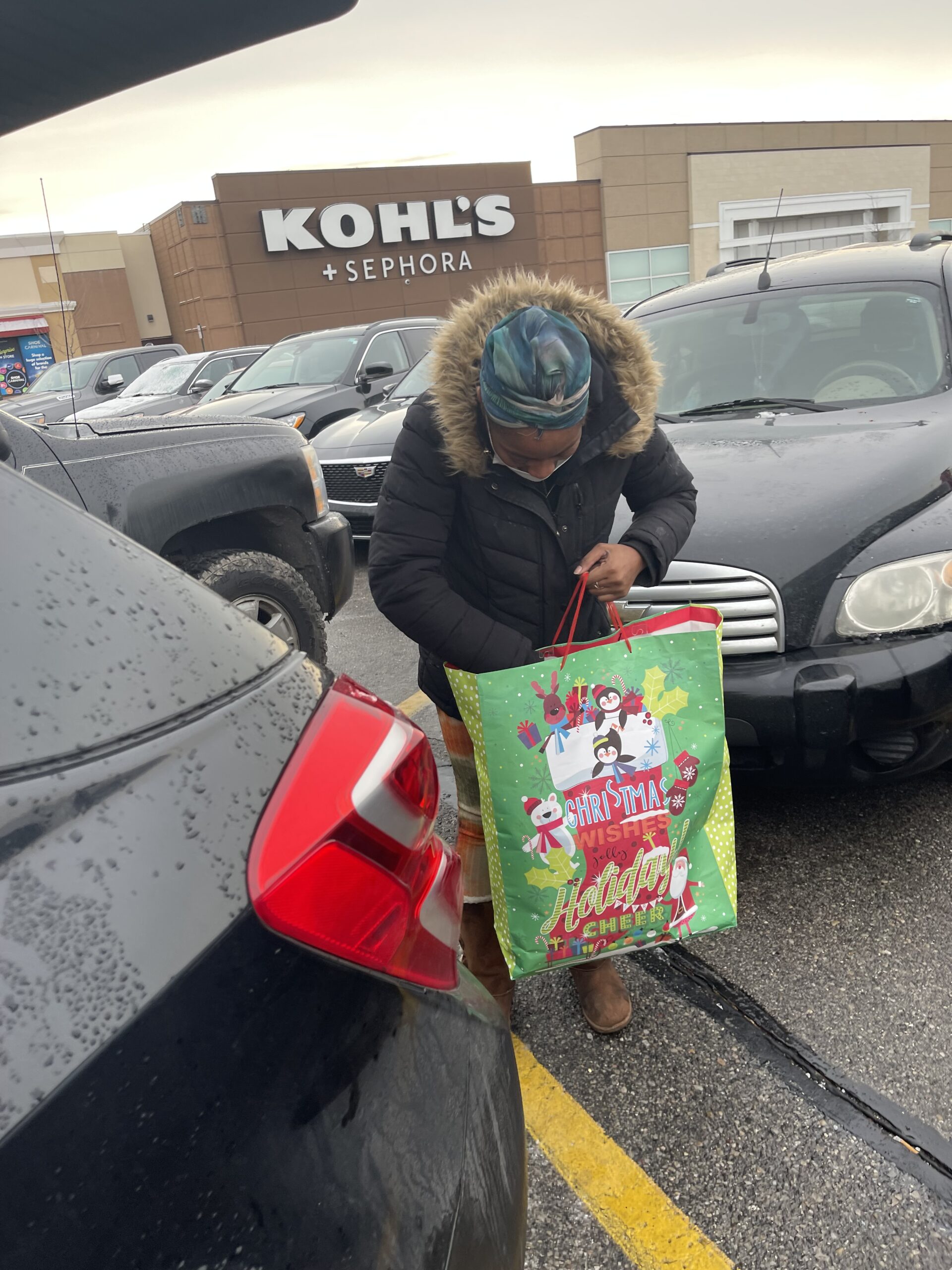 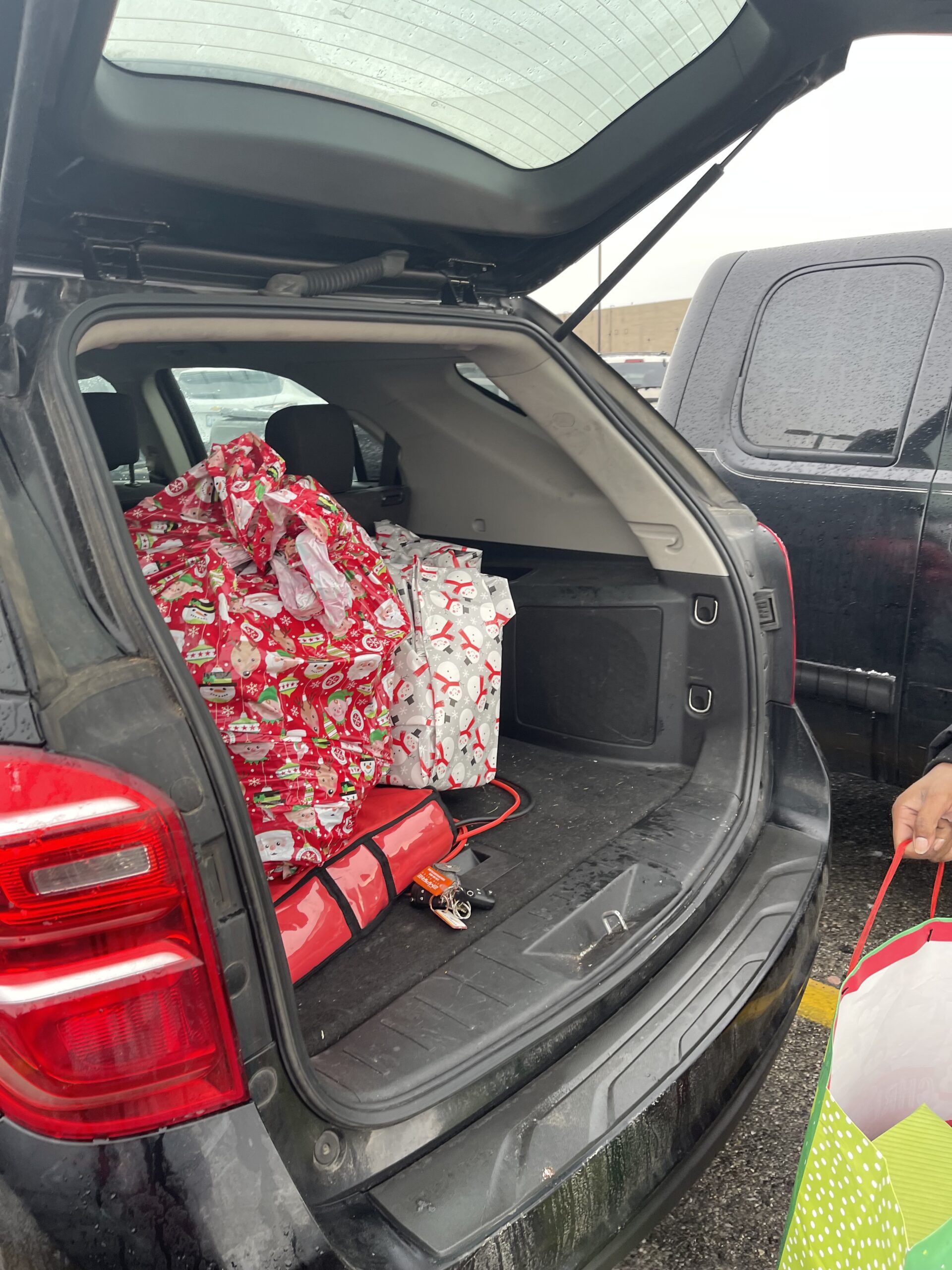 “She got something for my 8-year-old son and he’s not even in Head Start. She’s definitely a person who cares and has compassion, she takes her job seriously… She chose the gifts herself and they were perfect. She knows that I have twins so she got little toys and my son got cars and trucks and she got me a gift card and a robe, so it was things she was picking out herself. – Ms. Ford

“I bought the boys a lot of toys and some clothes, coats, shoes, and I gave Mom a gift card and bought her some things for the hotel and got the twins some things… I figured the twins could just use some pajamas and little toys and things of that sort, but my focus was the eight-year-old because it’s Christmas and you’re waking up in a hotel… So I kinda wanted to make it special for him because I have a young child too and I could not image at that time how he would have felt.” – Ms Capulong

Ms. Ford was happy to celebrate the holidays with gifts for her whole family and she now has a special bond with Ms. Capulong.

“Not only did she buy the kids things for Christmas, she had gifts for me and she still called and checked on me and it feels like she is like family almost… Jasmaine is nothing less than amazing.” – Ms. Ford

Currently, Ms. Ford is working in a factory in Detroit while she raises her three sons. The twins will be turning one-year-old in March.

With help from MCREST, Ms. Ford has filled out an application with the Detroit Housing Commission, Section 8 Program and is on track to receive rent assistance in a home that will accommodate her whole family. Ms. Jasmaine Capulong will also continue to serve the family as their Family Advocate while the twins continue to grow up and attend Matrix Human Services Head Start Program.